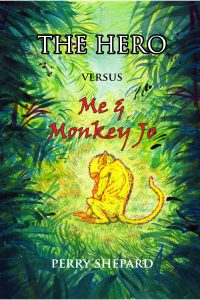 THE HERO versus Me & Monkey Jo

THE HERO Versus Me & Monkey Jo chronicles of adventures of Henry Neis who arrives in Vietnam an innocent youth from Kansas, and quickly falls in with addicts and lost souls. Perry Shepard’s prose pulls us into the “scene” immediately, and propels us on a journey that is at times exhilarating, shocking, funny, and moving. A rollicking read and an eye-opening look at the Vietnam War.

Perry L. Shepard is a Vietnam veteran who has written two novels: The Hero versus Me and Monkey Jo, and Hard Love. He is working on his third novel called Wolfgang about a truck driver who sells his soul to the devil. He recently compiled his only poetry collection to date titled, A Rhythmic Circus Of Sound Part 66: ARECOSPart 66. He has co-written two plays in the anthology titled, Annabelle. He has also been published in newspapers, college poetry collections, and fanzines.


He was a board member on a Community Radio Station in Salt Lake City (KRCL), a radio music programmer, and one of the founders of the Utah Music Association. He was the Mayor and President of Harveysburg Village Council in Harveysburg, Ohio. He owned and operated the Painted Word Emporium in SLC, Utah—a restaurant, art and performance space. He drove trucks, and shrimp fished out of Arransas Pass, Texas.
Shepard won second place in the Eber and Wein’s Best American Poetry of 2013, and an honorable mention in Writer’s Digest’ 84th annual Poetry Competition. Shepard is a board member of (SMAG) South Mass Art Guild in Lawrence Kansas, and is a visual artist. He has work with youth in crisis for the past 29 years.