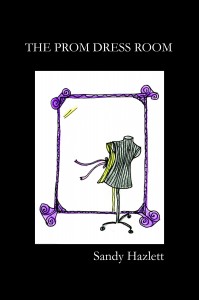 The Prom Dress Room is a collection of poetry and illustrations that were inspired by a room at The Social Service League, a thrift store in Lawrence, Kansas. The Social Service League was established to provide assistance for the widows and orphans who survived the infamous Quantrill raid on Lawrence on August 21, 1863. By the end of that century, “The Prom” had become an American institution, with every starry-eyed girl coveting the most gorgeous gown she could afford.

Hazlett recounts the experiences that led to her creation of The Prom Dress Room: “In Lawrence, Kansas, there is a unique thrift shop called The Social Service League which sells clothing, books, and household items and serves as a dynamic community hub. Upstairs, in its old stone building, the League has a room full of donated formal dresses which are given to young women to wear to their prom.

One winter I volunteered to clean and organize the dresses. As I sorted through their colorful variety, they began to tell their stories: Who wore this dress? What was her life like? Who would she become? Each week I took one dress home, made my amateur ink drawing, colored it in with fat pencils, and wrote the story of the dress and the young woman who wore it to prom. The result is this collection of nine illustrations and poems, The Prom Dress Room.” 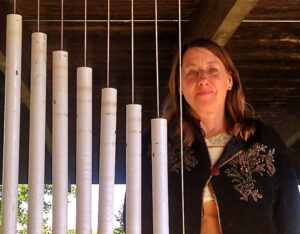 Sandy lives on a 160 acre farm in rural Lawrence, Kansas. She reads and writes and manages acres of wildlife area including a 4 acre pond, and takes care of pasture for a cattleman with Angus Beef Cattle. She grows organic vegetables, and has a large orchard with apples, cherries, peaches, pears, and plums, and she raises layer chickens. She lives with her companion, Jake Vail, and her two dogs, a black lab named Henny, and a red heeler named Whistler. Her sons, Adam and Joshua live close by.

A portion of profit from The Prom Dress Room goes to benefit the Social Service League.

The Prom Dress Room is also available at The Social Service League, 905 Rhode Island Street, at The Raven bookstore, and at Amazon.com. 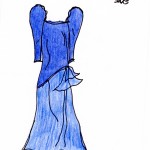