Book Launch Event: The Body on the Bed by Leonard Krishtalka 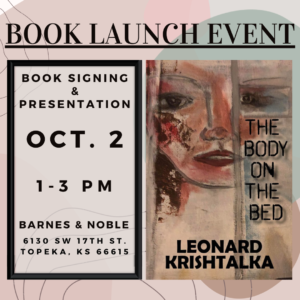 Reporter Mary Fanning finds the body on the bed, poisoned.

Mary finds the body on the bed in the house next door. Smart, tough and inquisitive, she covers the murder trial as the first woman reporter for the Kansas Daily Tribune. Amid the upheaval of post-Civil War Lawrence, she unravels the diabolical plots and desperate lives that led to three dead bodies and a shocking last act.

Did a doctor's brazen affair with his patient's wife incite him to murder? On the morning of April 28, 1871, the body of Isaac Miles Ruthman is found poisoned in his bed in Lawrence, Kansas. His doctor, John J. Medlicott, a fervent churchgoer, is arrested and charged with first degree murder. He's carrying a picture of Ruthman's wife, Anne Catherine, and two of her love poems in his wallet. He'd visited Ruthman the previous evening to give him a medicinal powder--a poison cocktail of deadly nightshade and morphine, according to the autopsy.

Is it a coincidence that the doctor's wife, Sarah, died suddenly and mysteriously just four months earlier? Did Medlicott first kill her, then Ruthman? Or did Ruthman commit suicide, depressed over his finances and ill health--authorities had to break into his bedroom when they found the door locked from the inside.

Mary Fanning, sharp, strong-willed, and the first woman correspondent for the Kansas Daily Tribune, is assigned to report on the trial and investigate Ruthman's poisoning. Her independence leads her to fight for suffrage for women and Blacks in post-Civil War Kansas. Her ardor leads her into an illicit love affair with a woman. Her incisive mind leads her to uncover lives torn by lust, obsession, and deceit, a trail of dead victims, and the fiendish scheme behind the body on the bed.

"A thrilling tale of murder and betrayal ... a defiant suffragist ... a lurid web of deceit ... impeccably researched."
~Kirkus Reviews